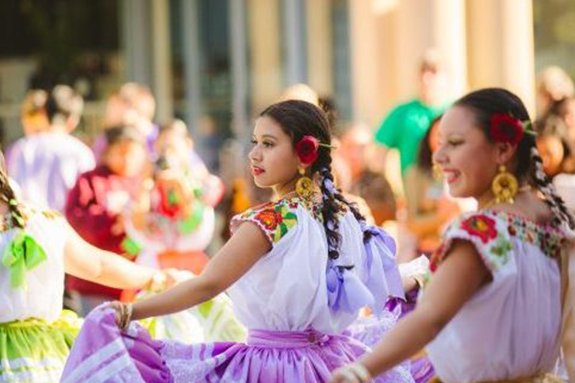 Lisa Christensen’s invention at the 418 Project connects the buoyancy of bungees with a climbing harness affixed to the ceiling so you can dance, bounce, spin, orbit, and leap as if you were free from gravity.

Her aerial bungee moon dancing class allows users to go with the flow, says Christensen, and it’s just one of the hundreds of classes offered as part of this year’s 10th anniversary Santa Cruz Dance Week, April 20-28, for a $10 all-access pass to studios all over the county.

This year’s week-long movement celebration is all about community participation, taking over downtown Santa Cruz with highly anticipated pop-up performances on the streets and in “unlikely places.”

Abra Allan, founder and director of Santa Cruz Dance Week, says that this year organizers are stepping back to let the community of dancers take the lead.

Kathak, an ancient storytelling tradition of traveling bards in northern India, and contra dance will make their debut at the kick-off event, “Dancing in the Streets,” on April 20—where there may be an extra large birthday cake for the 10-year anniversary, says Allan.

Throughout the day, dancers from all different studios will perform on three stages set up in downtown Santa Cruz—an evening of more than 50 performances from every imaginable genre. For those looking to let go, the Community Ecstatic Dance Party will take place on April 20.

When Allan first considered presenting a local iteration of National Dance Week—which celebrates the art of dance with street events and open classes across the nation—in 2007, she wasn’t sure how the community would receive it.

Allan says gauging the reaction an hour into the first kick-off event, it quickly became clear to her: Dance Week was here to stay.

Whether as creativity, fitness, fun, socializing, or spiritual practice, she says, there is a deep love of self-expression through movement in Santa Cruz.

“There is something instinctual about dance, if—but only if—you get out of the way and let it happen,” Allan says. “That is something that we struggle with culturally.”