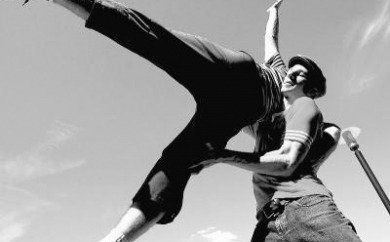 Beginning today, it is National Dance Week in Santa Cruz. In a philosophical sense, it is nothing less than a showcase to demonstrate just how wide-ranging and multi-faceted that word “dance” can really be. On a local level, however, National Dance Week is a reminder that, in defiance of the notions that mid-size towns don’t usually have big-city arts communities, Santa Cruz has such a staggering diversity of thriving dance subcultures, it would be the envy of bigger cities everywhere.The movement of the human body in a deliberate and aesthetically pleasing way may be the oldest form of artistic expression. Even so, judging solely by the activities taking place in Santa Cruz this weekend, it is by no means out of style.

Samba, African, hula, hip-hop, tango, ballet, modern, aerial, swing, belly, Irish, Brazilian and many other forms have found a welcome home in Santa Cruz County, and most of those will be on display in a series of performances and workshops throughout Santa Cruz, including dance performances breaking out in places where you don’t usually see dance performances.

On Friday night “” First Friday in downtown Santa Cruz “” casual strollers will be able to see hip-hop at the corner of Cooper Street and Pacific Avenue, Brazilian at the Palomar, Polynesian in front of Hula’s, jazz dance at the Rittenhouse building and more.

In conjunction with the First Friday activities, dancers are being dispatched to art galleries all over town as well from the Dead Cow Gallery to the Museum of Art and History to Vino Cruz to Graphix art and framing shop.

Tonight’s schedule of in-the-street performances is even more ambitious with continuous performances in the early evening hours in four separate spots downtown.

“One of the primary goals,” said the event’s coordinator Abra Allen, “is to try to represent every dance form that we possibly connect with in this town.”

As a member of the Gravity Girls, Allen herself is part of the burgeoning aerial dance scene in Santa Cruz. Aerial is dance done either on ropes, walls or other vertical surfaces. In the spirit of inclusion, she ventured into other genres of dance with which she was not as familiar. She recruited performers from active subcultures in African dance, Brazilian Capoeira, Balinese and contact improv, a dance form in which two or more dancers work in conjunction with each other’s bodies in full contact.

“I’m always interested in how certain genres really take hold,” said Allen. “In aerial, for example, I’ve really watched it grow from Miranda Janeschild doing some things to her students teaching students of their own.” Allen said that aerial dance has become something of a national trend as well. “It’s coming out of that fire-spinning, circus arts, Burning Man scene.”

Santa Cruz has for years been an epicenter for dance of many kinds. Tandy Beal &amp; Company, one of the nation’s most innovative dance troupes, has called Santa Cruz home for decades. The Santa Cruz Ballet Theatre has kept ballet a vibrant form in the area. African dance classes have been a central part of the Santa Cruz scene at least since the 1980s. Cabrillo College has a strong dance department, and all kinds of different subcultures from Irish dancing to Mexican folklorico have been established here.

“I’ve had a lot of people calling me, who have seen my name as a reference, who are surprised by how much dance is here in Santa Cruz,” said Allen. “Just the other day, I met a woman at a workshop who had recently moved here from San Francisco, who said that she was worried there wouldn’t be much dance here and that she was prepared to travel up to the city to find it. But she was surprised at what she found here.”

National Dance Week in Santa Cruz is meant to be a participatory experience as well. In that vein, there will be several free dance classes open throughout the week in genres such as zumba, hip-hop, bellydance, waltz, samba, Polynesian, tap, jazz and tango. Some of the classes will take place at Abbott Square adjacent to the Museum of Art and History.

Allen said that National Dance Week is merely a reflection of a dance scene that continues to grow. In the last year or two, established dance artists from Cid Pearlman to Shah and Blah Productions have popped up in Santa Cruz.

“I feel extremely grateful to be surrounded by such talent and diversity of dance in a town this small,” said Allen. “It inspires me on a daily basis. I seem to meet a new dancer every week nowadays.”