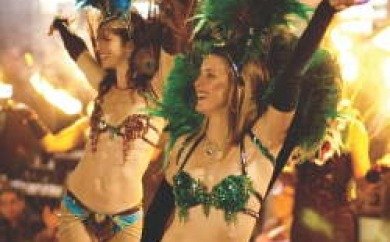 Dance, dance … otherwise we are lost,” said the late Pina Bausch, the German dancer/choreographer who was honored last year in Wim Wenders’ performance documentary, Pina. With that advice in mind, you may want to consider an exciting (not to mention free) opportunity to find yourself, as it were.

From April 19-27, National Dance Week Santa Cruz continues its annual custom of showcasing the best of the local dance scene, which covers an impressively diverse range of forms and styles. With the participation of numerous dance studios and instructors, as well as hundreds of performers, the event offers accessible performances, public exhibitions, and free classes.

The goal, ultimately, is to cultivate the growth and development of dance by encouraging both appreciation and participation. “The event really continues to grow every year, not just through the number of attendees to the event, but the number of dancers that participate,” says Abra Allan, founder and director of Santa Cruz Dance, who is producing National Dance Week for the fifth consecutive year.

The festival kicks off with an opening night staple, Dancing in the Streets, an evening that features entertainment on three different stages. “The other piece that I’m really excited about is a piece that we’ve been doing for a few years, called Dance in Unlikely Places, which is about site-specific dance,” says Allan. “The dancers will go out into communities and choreograph dance in a location, whether it be in a store, or a café, or a street corner, or a restaurant.”

This year’s incarnation of National Dance Week appears to be expanding its scale with an increasing number of participants. “One thing that I’m really excited about this year is that almost every dance studio in Santa Cruz County is participating,” says Allan.

It’s a sure sign of the local dance community’s health, which is as robust as ever. “Dance in Santa Cruz extends from one end of the county to the other,” says David King, a dance professor at Cabrillo College and member of the advisory board at Santa Cruz Dance. “Santa Cruz loves its arts and it really, really loves its dance.”

This came as a pleasant surprise to Dixie Shulman, a dancer and choreographer who experienced the festival for the first time after moving here last year. “I didn’t really know what to expect, and it was so much fun and so well-attended,” she says. “I was really impressed by the quality.”

Despite the relatively modest population, “There’s such a disproportionate number of artists here,” says Shulman, who is both a participant and organizer of this year’s National Dance Week. “I’m working with these brilliant dancers, I mean they really are fantastic—they’re as good as any of the dancers I got to work with in New York. Really, it’s quite extraordinary.”

Not only that, but the Santa Cruz dance scene embraces the full spectrum of dance genres. “Santa Cruz probably has as much diversity in its dance community as most metropolitan areas,” says Allan. “We’re extremely fortunate for a city of this size.”

Since last year’s edition of National Dance Week, the local dance community has continued to show signs of development. Allan points out that the Tannery World Dance & Cultural Center has opened, and that Motion Pacific reopened downtown in a large, renovated space. In addition, Allan’s own Motion at the Mill opened over the summer, which she explains is “a dance education space, but it’s also a performance space that was built specifically for dance.” A dance-specific venue “goes a long way to building a dance audience,” according to Allan.

While the demand for dance is high, keeping up with that demand can be a challenge. “At Cabrillo we’ve been packed at our classes,” says King, “although Cabrillo is facing such a large economic challenge over the next year that we’ve had to offer fewer classes while we have an expanding group of students who want to get into those classes. It’s somewhat tragic, actually.”

The increasing popularity of dance might even be related to matters of economics. “Dance is a constant flow,” says King, “and interestingly, when the economy gets tougher, people return to dance, because all you need to dance is enough food to eat and a place to stand.”

Dance also endures because it is perhaps the most instinctive of all artistic mediums. “Most of us have spent time with young children, and even in their first years of life they respond to rhythm and music,” says Allan. “I think it’s a biological part of all of us.”

In addition to considerable physical and mental ability, dance requires the emotional willingness to reveal one’s true self to the world.

“Dance offers physical activity, and offers self-expression within that,” says Allan. By that logic, dance is the art of being yourself. Not an easy thing to do by any means, but as such, it comes as no surprise to hear dancers describe the medium as an inextricable part of their DNA.

“Dance has been a part of my life since I was a small child,” she adds. “I come from a family of musicians, and the same music that inspired them inspired me in a very different way. So for me, it’s been a part of my life as far back as I can remember, and not to be completely dramatic about it, but it really is like breath for me—it’s a huge part of who I am and what I do.”

Beyond its capacity to inspire personal revelations, dance also has the potential to bring a community together, and National Dance Week exists in that spirit. “There are many, many streams of dance knowledge that come together in this deep river of dance in National Dance Week,” says King.

The medium provides a link between past and present as well. “If you’ve never danced before, Dance Week is a great entry point into a whole world of art that’s been around since before the beginning of civilization,” says King. “It’s a permanent part of human history, and Dance Week gives you a moment where you can take a free class and tap into that big well-stream of information of ideas that have been passed down for centuries. It’s a way of becoming part of the human culture in a deep and interesting and connected way.”