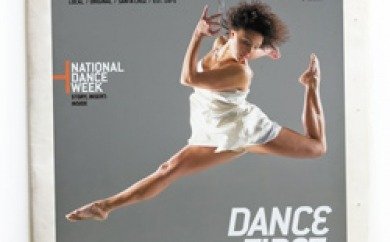 National Dance Week arrives. Is Santa Cruz Ready?
“Dance first.  Think later.  It’s the natural order.” —Samuel Beckett
Leave it to a playwright to set things straight.  Dancing, Beckett seems to suggest, allows us access to a deeper well that can better inform our thinking. If that’s the case, then the decision by Abra Allan to move Motion Pacific Dance Studio to a larger space was a good one: more room makes for more people dancing.

And get this: results from a 21-year study conducted by the Albert Einstein College of Medicine give Beckett’s quote new meaning. As reported in the New England Journal of Medicine, frequent dancing has the best track record of keeping dementia at bay, better than crossword puzzles and reading.

And there could be no better time to caper than National Dance Week, starting at 5 p.m. April 21. (full schedule below)

Bred from the desire to bring greater recognition to dance as an art form, National Dance Week was created in 1981 by a group of dance-related organizations.  It was picked up by major cities including San Francisco where it caught Sara Wilbourne’s eye. A longtime Santa Cruz dancer, educator, and arts administrator, Wilbourne called dancers in the area together for a meeting. “We were all off working in our own little cocoons and I wanted to bring the different entities together,” she says. “National Dance Week was the perfect vehicle for it.”

That first National Dance Week celebration took place in 1994 at Louden Nelson Center where dancers took the stage for 15-minute increments in a heady succession of dance styles. Workshops were held in adjacent rooms. It was a one-site event.

Remarkably, from those small but enthusiastic beginnings, the event has continued to grow. Dozens of performers and thousands of spectators take part in the opening.

Currently in its fourth year under the direction of Motion Pacific Dance Studio owner Abra Allan and Santa Cruz Dance, this year’s celebration will replicate Allan’s original mandate to get dance out of the studio and onto the streets. If you’ve never managed to stumble across the variety of dance splashed across multiple stages during opening night’s “Dancing in the Streets” event, or had dance spontaneously surprise you in a parking garage or sidewalk as part of “Dance in Unlikely Places,” consider this your invitation. You can follow it up with a free lesson from a long list of studios giving them away during the week.

This is an opportunity for art to catch us off guard, interrupt our day-to-day routines. “Dancing in the Streets” will gather a variety of dances into one event: samba, capoeira, belly dancing, Balinese mask dancing, tango, ballet, Brazilian, contemporary, Polynesian, and more. Stages will be set up on Pacific at Church Street, Pacific Avenue at Locust Street, and Cooper at Front Street.

Throughout the week, “Dance in Unlikely Places” will push dance even further into the community as performances pop up in and around town. Dixie Shulman has danced her entire life and recently relocated to Santa Cruz from New York where she had her own company for 10 years. The New Yorker magazine called her “campy, loud, and irrepressible.” She’ll be performing a dance piece in the crosswalk at Pacific Avenue and Lincoln Street as part of “Dance in Unlikely Places” at noon Friday.

“This is my first time doing National Dance Week and I’m excited to see how it all works,” says Shulman, who has an upcoming performance slated for the 418 Project featuring her company, Dixie Fun Dance Theater.

It’s a testament to the rich dance community in Santa Cruz that dancers like Shulman and Fulbright scholar Cid Pearlman of Los Angeles are landing here and, finding fertile soil, deciding to stay.

The prospects are good.

Allan herself has long had an affinity for dance and has a worthy goal: infuse the local dance culture with a renewed sense of rigor and imagination. Part of this goal is being met by the creation of Santa Cruz Dance, a partner group to Motion Pacific that acts as a conduit for dance groups working within Santa Cruz County. Santa Cruz Dance provides resources, support, and a hub for conversation within the dance community.  Santa Cruz Dance will work to “create a high-quality and consistent dance presentation model that will allow Santa Cruz to grow its dance audience and dancer community,” says Allan.

Damara Vita Ganley dances with Joe Goode Performance Group in San Francisco and teaches at the Berkeley Ballet. She lives in Scotts Valley and sees the prospects for dance in Santa Cruz improving thanks to Allan’s vision.

“Abra’s goal is to bring really high-level dance to the community as an important part of our social structure,” notes Vita Ganley, who’s an essential component of the connection between San Francisco and Santa Cruz that Allan wants to nurture. As Ganley says, this will “create a landing place [for] artists who are working deeply in their craft so Santa Cruz can learn from them and hone its craft.”

Local dancer Daniel Davis has similar thoughts. Davis taught at Motion Pacific years ago and now teaches contact improv and improvisational composition along with performing throughout the Bay Area.

“Santa Cruz is somewhat isolated so to have artists come and bring their work provides cross pollination,” Davis says. “It’s vitally important to contextualize [dance] in a bigger conversation.”

Bigger conversations and bigger programming. This move to expand local dance so it figures more prominently on the world stage has much of its locus in Allan.  Her drive stems from a childhood dream fleshed out through experience.

Born in Sonoma County, Allan started dancing there at the age of 5. When her family moved to Santa Cruz, she got involved in an eastside dance studio that focused on competition-style dancing. This was long before the success of So You Think You Can Dance and Dancing with the Stars but the emphasis then was essentially the same: tune your body so you can compete and bring home the prize. Though they vary widely in the quality of training, competition-style studios, as the name clearly suggests, prepare students to pit their skills against others’.

For Allan, the end result of this type of training, which she did up until high school, gave her some perspective on the potential fallout from competition. We’ve all heard the claims: too much pressure, lack of self-expression, highly technical. It has its place but it’s not for everybody. And often, as was the case for Allan, the pressure exerted by competition-style dancing results in many students leaving to pursue other interests.

But Allan kept coming back to dance despite her early experiences. There were gigs in a variety of companies as she project-managed productions. She married, had a baby, and finished her Community Studies degree at UC Santa Cruz with an emphasis in nonprofit organization. And she continued to dance: at Cabrillo, UCSC, and with Miranda Janeschild, someone she calls  “an incredible mover,” and for whom she eventually worked as program director, managing the details of Janeschild’s Mir and Company.

Allan was inspired to take things to a different level and, in 2007, made a proposal to the Downtown Association (DTA) to manage National Dance Week. The DTA took her up on the idea and, for the first two years, co-produced the event with Allan who saw as essential to the repositioning of the event the need to take it to the streets, creating a festival-type environment that, instead of cooped up inside studios and rec rooms, would be raucously available to anyone who happened to stumble across it. For two years, Allan co-produced with the DTA. Last year marked her debut as solo pilot.

It was in 2009 that all this childhood dream stuff came up. That was the year Molly Valera, then owner of Motion Pacific, came to Allan with her own proposal.

Valera was one of the original founders of Motion Pacific and was then running the place on her own, earning Calabash, Metro, and Good Times awards along the way as she consistently provided some of the best dance training in Santa Cruz. By 2009, she was ready for a change.

She came up with a list of people she could trust with maintaining a zeal for dancing while supporting the staff and environment for quality dance instruction she had devotedly nurtured over the years.

“It was a pretty short list of people,” says Valera who now works full time in the mental health field. “Selling the studio was not as important to me as making sure it went to the right person.”

As Allan remembers, it was late spring when Valera approached her with an offer. She wanted to give Allan the studio.

“I was a bit shocked at the offer,” recalls Allan who, at the time, was in the middle of her second year running National Dance Week.

For Valera, it was a way to maintain the legacy of the studio without worrying whether her work had been in vain. For Allan, it sparked a memory.

“It was totally in alignment with what I was doing and, honestly, if I thought back, the first thing I ever thought I wanted to be when I grew up was a dance studio owner.”

Allan’s dream came true with the opening of the newly renovated Motion Pacific Dance Studio at 131 Front St. But after a brief false start the studio is now waiting until construction is completed at which point the grand opening celebrations will be scheduled. A temporary studio site will open soon.

Vibrant, fecund, and burning with purpose and enthusiasm, the state of dance in Santa Cruz is moving to another level.

And with National Dance Week taking center stage, there’s no excuse not to dance. For the next week and beyond, there’ll be plenty of jumping, leaping, turning, and shimmying. Don’t worry about what people think. In fact, think later. Right now, just dance.